In which everybody’s anxiety becomes overwhelming and some of us become guinea pigs.

In case you (or I) had forgotten there are two other children in my family.

The Eldest who I refer to as “The Glory Of the Clan” and Rab. While I worried, drove Pearl to appointments and physio’d the living daylights out of her, they were at school doing schoolie things.

You know how some children are “eccentric” “An Old Head on Young Shoulders” or “Have Been Here Before”? That was Rab. On leaving nursery for ‘big school’  he declared to the teacher ” Mrs B when I leave here I will hold you in my heart forever” (he was 4). Mrs B was charmed and asked if that was how my husband talked to me at home. It wasn’t.

For all of you wonderful and observant readers who already able to diagnose him, I would like to point out that all children are different and some are more sensitive than others. So there.  Dubbed “Victorian Rab” by a friend we rather liked it.

The sensitivity was definitely intensified by a game devised by The Glory of the Clan called  ‘Baby Goes to School’. The Glory was the Teacher and Rab was baby. Baby did NOTHING right and was constantly berated by the miserable teacher, apparently a close relation of Matilda’s Miss Trunchbull.

At real school Rab was becoming very, VERY anxious about failure. At 6. He was finding completing work challenging mainly because his ideas for topics and work were so unrealistic. If the subject was transport while other people wanted to draw a train, Rab  decided he wanted to design a car. A working car. And build it. When he couldn’t he became very angry with himself and frustrated, because of course all  the rest of the class could finish their work properly,and he just couldn’t, and he couldn’t adjust his expectations and he found it pretty difficult to move onto the next task before completing the first. Rab felt he was so stupid that one day at home having failed in a self imposed quest he charged down the stairs , crying and saying he wanted to kill himself. At times of stress this would change to the even more distressing “kill me Mummy”

At home Rab was concerned about death, us dying, something happening to Pearl, flood, war. So far so tender hearted, but he was also becoming angry. This built up and shortly before Pearl’s first birthday he was having massive,violent temper tantrums which included throwing things and wilful destruction of property. Rab also had some odd anxious looking behaviours. In the car he would pluck at his face and then put his fingers in his mouth and make to swallow. He did this repeatedly. When asked about it he said people were shooting arrows at him and he had to catch them and get rid of them.He was very imaginative. Rab also had to touch everything ,and if you told him to leave something alone he had to touch it once more, again, before obeying .He loved being outside and playing ,but hated getting his clothes  or hands dirty. If a fire engine went past (and his school was opposite a fire station) he put his fingers in his ears , closed his eyes and screamed.

I see you people- sit on your hands and keep your opinions to yourself- he was obviously just sensitive, tender hearted and picking up on the worry about Pearl that was battering our household in tumultuous waves.

In between these outbursts Rab was a happy, cheerful, loving and empathetic child.He was popular had a handful of good friends,and was well liked by the teachers. 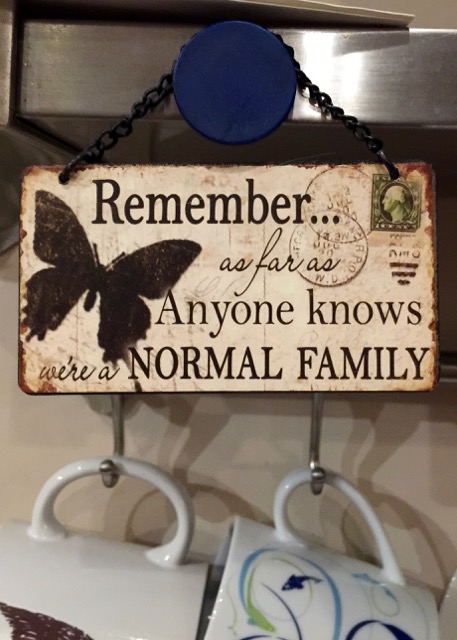 Luckily at this point I spotted an advert, from a local  University Psychology department,in the local press that said “Anxious Child?” Screaming “yes!” I phoned the number, Rab was diagnosed with Anxiety Disorder and became part of a double blind clinical trial. He was, fortunately, chosen to receive remote CBT (Cognitive Behavioural Therapy). The parents  (me, as Mr.Pearlie J had to stay home and hold the fort) attended a group, learnt CBT strategies and went home with homework to apply them to the unsuspecting anxious child. It was interesting, it was effective Rab was fixed!

Baby Goes to school was discouraged, Rab was given one to one support from  fabulous and effective parents,  Pearl continued to be strung up in towels and rolled over Physio balls, The Glory was glorious, and, again I had it nailed. I had accessed services, provided treatment and fixed the problem.  I was Superwoman.

“Don’t thank me that’s what I do” (Captain Adorable)

4 thoughts on “As far as anybody knows we are a normal family….”